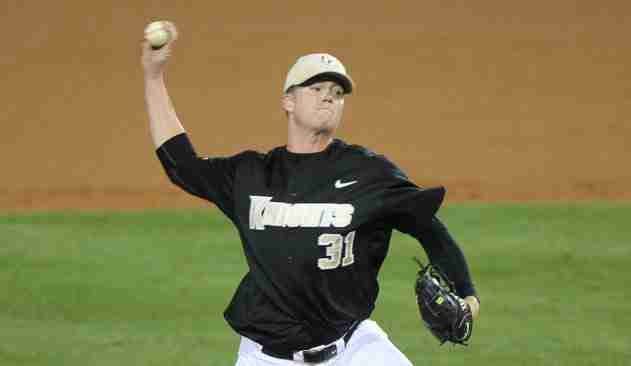 ORLANDO – Erik Hempe, Parker Webster and Austin Johnston propelled the UCF Knights win 5-2 versus the Florida A&M Rattlers in a closer game then the score shows at Jay Bergman Field on Wednesday, March 13.

Head coach Terry Rooney said, “Zac Favre has done an awesome job for us all season.” “For a freshman, he sure doesn’t pitch like one. He pitches like a seasoned veteran.” “I had no intentions of pitching him as long as we did, but I also didn’t intend the game to be what it was.”

UCF got on the score board early in the bottom of the first, when Erik Hempe singled to right field to drive in James Vasquez and take a 1-0 lead over FAMU.

Head coach Terry Rooney said, “ We need to have more quality at bats and the two things we need to focus on is two out hits and not let someone get through the order twice on us our offense is too good for that to happen go through it once see what he’s got three pitches for strikes we are not facing somebody Anderson from JU, guy who is going to be a great pick and first time through he didn’t throw his change-up now second time through he got another pitch.”

Zac Favre got the win, when he replaced Skoglund in the sixth inning. Favre pitched 3 2/3 innings and allowed a walk and recorded nine strikeouts.

Zac Favre said, “ I was just trying to get the two strikes and have my defense work.”

“I thought Favre did very well, team came out we need a big outing from the bullpen. That’s a good feeling knowing someone is going out there put up a zero,” said Chris Matulis.

Florida A&M tied the game in the top of the fifth inning, when Hunter Barfield singled into left field which scored Bryce Farrar and advanced Aaron Smith to second.

FAMU extended their lead in the top of the sixth inning, when Bryce Farrar struck out swinging and reached first on a wild pitch that scored Sylvester Peck and advanced Evan Dupree to second on the pitch.

UCF had many opportunities to tie the game but couldn’t capitalized until the bottom of the eighth inning, when Parker Webster had so clutch hitting and singled into left field which scored Chris Taladay to make the score 2-2 and advanced Austin Johnston to second.

UCF took the lead back in the bottom of the eighth inning, when Austin Johnston scored from third on a wild pitch. The Knights also scored another run on a wild pitch and from Nick Carrillo’s rbi which scored Jeramy Matos which made the score 5-2 UCF.

UCF leads the all-time series against the FAMU with a record of 17-2-1.

The UCF Knights next play a four game series against Columbia that starts on March 15-18 at Jay Bergman field.