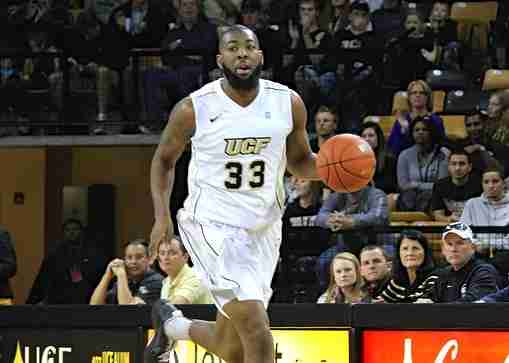 ORLANDO – Keith Clanton spurns the way for his last home game for the UCF Knights, but it wasn’t enough as the No. 19 Memphis Tigers claimed its eighth regular season Conference USA title with a 76-67 win over UCF on Saturday, March 2 at the UCF arena.

“We had some guys playing more minutes than they were used to and we probably got tired some there in the second half. I thought we had some plusses out of this game, but Memphis is a tough, physical team that presents a lot of matchup problems and we couldn’t hang with them”, said UCF head coach Donnie Jones.

As Memphis improves their record to 25-4 overall and undefeated in Conference USA with a 14-0 record.

“We didn’t know until last minute. So I don’t think that would of changed the game plan and it wouldn’t of changed anything Casey does a good job. We didn’t get the win so I don’t think it would of matter. We definitely needed him and definitely could have used him tonight”, said Calvin Newell about the absence of Tristan Spurlock.

“That hurt us in the first half towards the ends because he (Coach Jones), had to put in younger guys which started to turn the ball over”, said Newell.

UCF came out to play early on as they feed off the crowed energy to really put Memphis in a hole.

Josh Pastner showed his frustration early on as he subbed out players to find the mixture of players that was going to work to get something going as they were in trouble on the road early.

“We were probably a little tight after losing a game for the first time in a while. But we got some energy off our bench, especially Chris Crawford, who played at an extremely high level, and that helped us find a way to win”, said Memphis head coach Josh Pastner.

Memphis clawed into the game late in the first half as they went on a run of their own to control the game and take the lead into halftime 34-29.

Keith Clanton, Bobby Horodyski and Robert King III were all honored before the game as this game was the last home game for all of them as UCF Knight players. After the game they wereall very emotional as they walked around the court to thank the fans with all of their team mates for the support they have shown all season long. As the counted attendance at the game was 6,447.

This is also a milestone for the Head Coach at Memphis Josh Pastner, who collected his 100th win of his coaching career thus far. In his fourth season as the head coach of the Tigers, he has earned 24 wins or more in all the seasons he has coached Memphis. He as been coaching at Memphis since the 2009 season.

Head coach Josh Pastner said, “We got to try and win as many as we can its be like that my entire career here and every night we get everyone’s best shot and we got to bring it.”

The Tigers out came in the second half looking like a different team then the first half. As they got the first two baskets of the second half, but then the Clanton went on a run of his own as he scored nine continuous points to tie the game up at 38 with little more then 15:30 to go in the game.

UCF tried to fight back, but Memphis was already ahead too much for the Knights to close on the Tigers as the closest UCF got was tied at 38 apiece as Memphis won they game 76-67 at the UCF Arena.

Head coach Donnie Jones said, “ I think that would be a great mile stone for our program here to have three straight 20 win seasons here and to happen here one other time and we will shot for that on Wednesday.”

It was the last home game for the Knights on the season as they played on the road at UAB on March 6 and at Southern Mississippi on March 9 to finish out the season because of sanctions they aren’t allowed to go to the Conference USA tournament or the NCAA Tournament.