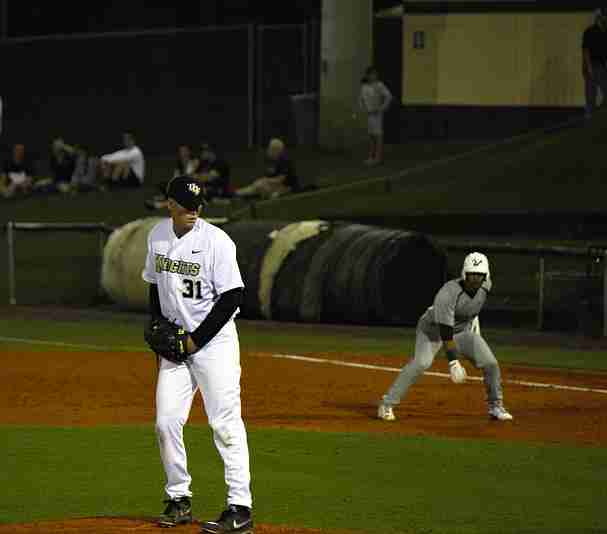 ORLANDO – Jimmy Falla went 2-for-3 with two runs batted in and two runs scored as the University of South Florida Bulls defeated the University of Central Florida Knights 6-4 on Tuesday, Feb. 26 at Jay Bergman Field on the UCF Campus.

The matchup between the two teams was the 111th meeting between the Florida schools that share the “War On I-4” rivalry.

USF got on the scoreboard first when Falla led off the top of the second inning with a double for the Bulls. Chris Norton later advanced Falla to second with a ground ball to the shortstop, as Falla scored from third on a Austin Lueck ground ball to second giving USF an early 1-0 lead.

“USF played better than us throughout the course of nine innings,” said UCF head coach Terry Rooney. “Their pitcher did a very nice job. We didn’t pitch very well tonight, we just did some uncharacteristic things.”

The Bulls used a three run fourth inning to jump out to a 4-0 lead over the Knights going into the fifth.

UCF starting pitcher Brian Adkins started the fourth inning by hitting Alex Mendez with a pitch, then giving up a single to James Ramsay, followed by double from Falla which brought in Mendez from third.

“You’ve got to pitch better than what we did, everybody,” said Rooney after the game. “It comes back to all the little things and we just have to pitch a lot better.”

After getting Norton to line out to Chris Taladay, Rooney went out to the mound to talk to his pitcher.

Austin Lueck gave the Bulls a 3-0 lead when he grounded out to shortstop, scoring Ramsay from third. USF added a third run when Blake Sydeski lined an RBI single into left field scoring Falla from second, extending the lead to 4-0.

USF added another run in the fifth when Nik Alfonso led off the inning with a single and later scored on a Ramsay single to right field, giving the Bulls a 5-0 after the fifth.

UCF scored two runs in the bottom of the seventh after USF extended its lead to 6-0 during the top of the inning.

“We just came up a little bit short,” said Rooney after the game. “We dug ourselves too deep of a hole early, that’s what it is.”

James Vasquez gave the Knights their first run of the game when he drove Bulls pitcher Joey Lovecchio’s pitch to right center field for his third home run of the season.

Jeramy Matos cut USF’s lead to 6-2 when he also hit his third home run for the Knights with two outs in the bottom of the inning.

In the eighth Erik Hempe hit a solo home run, bringing the score to 6-3. The Knights added another run on a two out RBI single from Vasquez making the score 6-4.

UCF threatened in the ninth by getting runners on third and first, but the rally ended when Taladay lined out to the shortstop to end the game.

“I’m very proud of the way the guys battled back,” said Rooney. “They battled back all the way to the end and showed a lot of fight and a lot of courage, and those are qualities of great teams.”

USF starting pitcher Michael Clarkson recorded the win for the Bulls, pitching four innings and allowing no runs on one hit and one walk, while striking out one.

The win improved USF’s record to 2-5 for the season as the Bulls prepare to play their first home game on Friday, March 5 against Toledo.

The USF win snapped a three-game winning streak by UCF against the Bulls.

“It’s just great to come in here with the win,” said USF left fielder Alex Mendez about the win. “And then hopefully we can build momentum and keep this season going.”

With the loss the Knights record falls to 4-3 over the season. UCF’s next game will be Wednesday, Feb. 27 against Bethune-Cookman in Daytona Beach.

The two teams will meet again on April 10 in Tampa for the final game of the series before the Knights join the Big East in 2014.