Magic debut traded players in the loss to Cavaliers 118-94 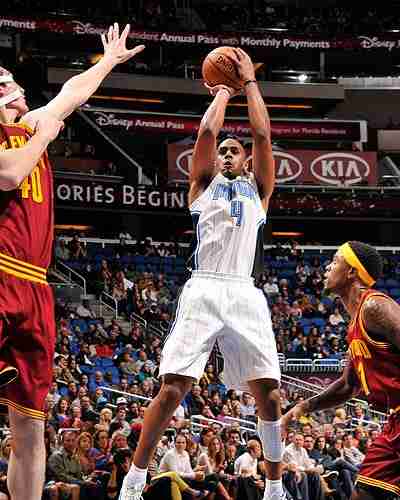 ORLANDO – Tobias Harris had 14 points and six rebounds in his debut, but it wasn’t enough as the Cleveland Cavaliers defeated the Orlando Magic 118-94 on Saturday, Feb. 23 at the Amway Center.

“We went from introducing ourselves to trying to put in a few sets and play on the floor,“ said Magic head coach Jacque Vaughn after the game. “But the good thing is those guys were able to get out there, touch the floor a little bit and get to know their teammates a little bit, so that was good.”

Arron Afflalo led the Magic in scoring with 16 points, while Marreese Speights of the Cavaliers led all scorers with 18 off of the Cleveland bench.

“I just wanted to come out there with a lot of energy and try and get it going,” said Speights of his performance.

Beno Udrih, who was also making his Orlando debut scored 10 points and seven assists off the bench for the Magic.

“Beno is a professional,” said Vaughn about Udrih after the game. “He’s done it, he’s been there. He’ll be able to settle us, he’ll be able to get us in our sets, and he’s very comfortable at pick-and-roll and making shots.

“He’s been doing it a long time, he knows how to play the game.”

Harris and Udrih, along with Doron Lamb, were playing their first game with Orlando since being traded to the Magic on Thursday. The players were yet to have had a full practice with their teammate prior to the game.

“Well we haven’t had a practice yet,” said Vaughn when talking about the team’s chemistry with it’s new players. “Monday I’m looking forward to it. They’ll be able to maybe know each other’s middle name by then and we’ll know how to pass it to each other and where we want it and we’ll be better.”

The Cavaliers started the game on a 12-5 run during the first four minutes of the game.

Orlando went into the locker room at halftime with the score tied at 51-51. E’Twaun Moore led the Magic with eight points and four assist during the first half.

Cleveland used 12 third quarter points from Tyler Zeller to go into the fourth quarter with a 87-72 lead over Orlando. Zeller finished the game with 16 points and seven rebounds.

The Cavs started the fourth quarter on a 27-12 run as they began to run away with the game midway through the final quarter.

“It’s a little tough,” said Harris about playing with a new group of teammates. “But the guys are going to help us along the way and get us out there.”

Doron Lamb, who was the third piece in the J.J. Redick trade, played 10 minutes and went 0-3 shooting in his Magic debut.

“Glad I was able to get Doron out on the floor too and get him some minutes,” said Vaughn. “It was good to see him guard defensively and give good attack to the bucket. It was good to see all three guys out there.”

The Magic finished the game with five players having double-digit scoring nights.

Moore played almost 28 minutes, scoring 12 points and dishing out five assists while starting in place for the injured Jameer Nelson.

With the loss Orlando’s record fell to 15-41, while also extending their losing streak to five games. This was the team’s fourth game in five days.

“I don’t want to use excuses,” said Vaughn about playing back-to-back games. “It’s the NBA, that’s part of it. We all go through the schedule the same way.”

The Magic’s next game will be Tuesday, Feb. 26 against the Philadelphia 76ers at the Wells Fargo Center.