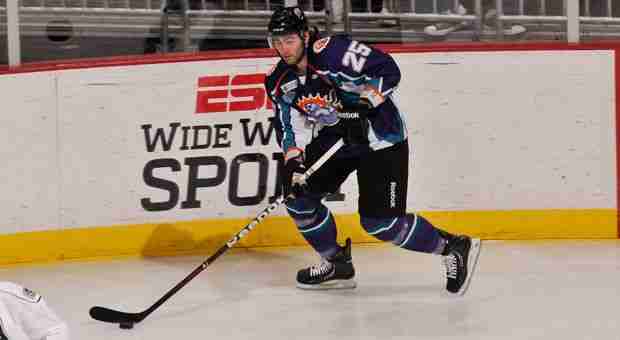 ORLANDO – Corey Trivino and Matthew Pistilli each scored during the second period, as the Florida Everblades defeated the Orlando Solar Bears 3-1 on Thursday, Feb. 7 at the Amway Center.

Chris Lawrence gave the Solar Bears an early 1-0 lead when he scored his sixth goal of the season five minutes after the puck dropped. Rob Mignardi and Alain Goulet both assisted on the Lawrence goal.

“I thought we worked hard for the first ten minutes,” said Solar Bears head coach Drake Berehowsky after the game. “And then it seemed that we just lost our jump.”

Leigh Salters tied the game at 1-1 for the Everblades when he scored on an assist from Alex Hutchings 1:40 after Lawrence gave Orlando the lead. The Solar Bears outshot Florida 11-6 during the first period.

“It was just another game of hockey,” said Solar Bears captain Ryan Cruthers. “There was a couple of breaks that they capitalized on. We had plenty of grade A scoring chances that we could have easily been up or at least tied.”

“So it’s just one of those games, they got the break, they capitalized on their chances tonight, and we lost.” added Cruthers.

Trivino gave the Everblades a 2-1 lead with 4:55 remaining in the second period when he scored his seventh goal of the season thanks to a Mathieu Roy pass in front of the crease.

Pistilli extended Florida’s lead to 3-1 when he scored a powerplay goal on another Mathieu Roy assist with 2:48 remaining in the second stanza.

The Solar Bears entered the final period trailing the Everblades 3-1, while outshooting Florida 26-20 during the first two periods.

“I think we just tried to get a little too fancy,” said Berehowsky about the last five minutes of the second period. “We didn’t execute properly, we didn’t execute all night on getting the puck 200 feet and it cost you.”

“Those little mistakes, those attention to detail things will cost you if you do them time and time again.” added Berehowsky.

The third period went all 20 minutes without seeing a goal, but Florida did manage to outshoot Orlando 14-9 during the final period of play.

“We were probably pushing a little too hard, taking a few more risks than we normally would,” said Berehowsky of his teams play in the third period. “We put ourselves in that spot and we’ve got to learn that we can’t get behind and cheat that way.”

With the loss the Solar Bears record falls to 21-23-2-3 and now sit in a tie for 12th place with the Kalamazoo Wings. Orlando now sits five points back of the eighth and final playoff spot.

“Every game is a playoff game for us right now,” said Cruthers about a potential late playoff run. “We put ourselves behind the eight ball early on. Everyday is a new day to prove ourselves.”

“Right now our goal really is to win two out of three games every weekend and we’ll be in a good spot when it comes time at the end of the year to see where we’re at.” added Cruthers.

The Solar Bears return to the Amway Center Friday, Feb. 7 at 7:00 p.m. for another match-up against in-state rivals Florida Everblades.