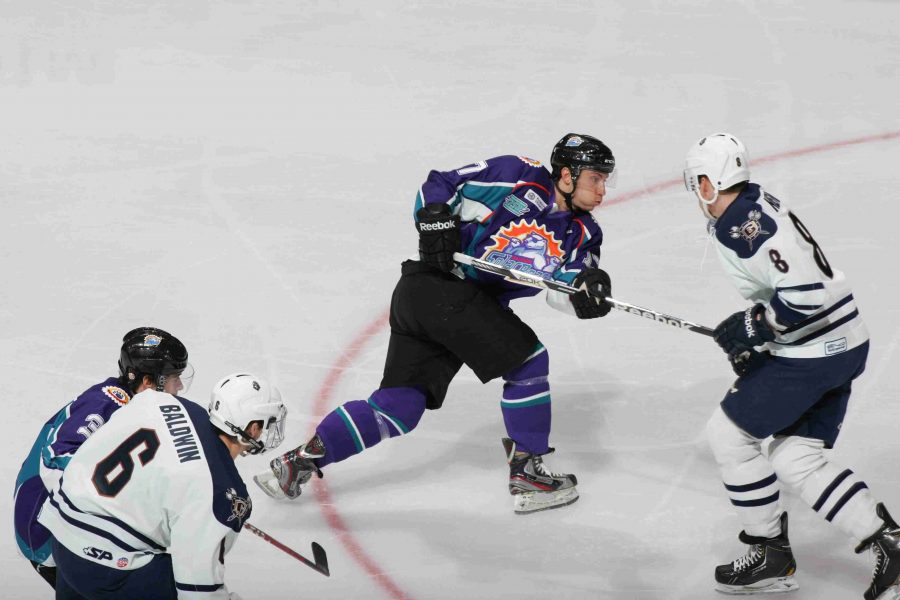 Dries scored his first goal as a Solar Bear with assists by Michael Neal and Ryan Ginand at 2:20 into the third period to grab the 3-2 lead and guide his team to victory.

“The puck was deep in the corner and kind of got stuck under the defenseman,” said Solar bears forward Dan Dries when asked by reporters about the game winner.

“Neal made a nice little chip pass, and made it easy so it was a good play.”

Orlando would go ahead to draw even in the two games against Greenville this week as they took care of the top seeded Road Warriors.

Before the tie breaking goal Greenville had tied the game at two by a goal from forward Chad Ziegler assisted by Danny Hobbs and Ryan Flannigan as the Road Warriors kept the Solar Bears scoreless for almost ten minutes to earn two consecutive goals.

Holding off the opponent was crucial for Orlando as coach Drake Berehowsky has stressed about to closing out games especially when having the lead with under five minutes to go.

“It’s always important to hold on to leads, ” said Berehowsky when asked what it means to finish games strong.

“I don’t think it was anything they did that was too special, it was what we did, our mistakes. We watched it on video, and we’ve learned from it and hope it won’t happen again.”

Greenville, sitting atop of the Eastern Conference among other top teams had their first goal scored by Bretton Stamler assisted by Brendon Connolly to bring the Road Warriors within one at 15:04 into the second period.

Orlando got off to 1-0 lead in the first period with a goal by C.J. Severn assisted by Matthew Sisca and Ryan Cruthers and earned their second goal to give them insurance heading into the intermission.

With the victory the Solar Bears move up to the eleventh seed  in the standings and inch there way closer to the eighth seed playoff position as they focus on playing as if it were the post-season already.

“That’s our goal we have to get into the playoffs and winning a game like this gives us confidence,” said Solar Bears defenseman Derick Martin.

” I think our playoffs for us started already because we have to win every game to the end of the year to make it.”

Orlando will unveil the Turner Cup championship banner on Saturday, Feb. 2 when they play their next game against the Trenton Titans.