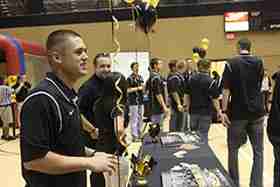 ORLANDO – The University of Central Florida Knights baseball team hosted a fan fest in which the team interacted with other students and fans on Saturday, Jan. 27 at the UCF Venue.

At the event, the UCF baseball team and coaches mingled with fans, family and students before their season opens up.

It was a family friendly event where fans had the opportunity to meet their 2013 team and interact with them.

The Fan Fest included raffles for season tickets to UCF’s games and other prizes. They also had a “wiffle” ball home run tournament and a fastball contest.

The team is all ready for this season and are aiming to try and win the Conference USA division.

“UCF baseball is ranked 7th in the country this year and our goal is to get better. Conference USA is an outstanding  conference and they’re pretty good competition,” said head coach Terry Rooney.

“I expect to go out and play hard this season with pretty much a new team this year and I expect us to be tough,” said Woods.

“Conference USA is really tough it’s one of the toughest on the country we also have new players with experience but we’re ready,” said Vasquez.

“This year I’ve gotten a lot bigger from last year but one of my biggest factors is slowing the game down,” said Lively.

Now UCF is ready to start the season strong with a new team and new expectations starting with their first game of the season on Tuesday, Feb. 19 with a three game series against Siena.