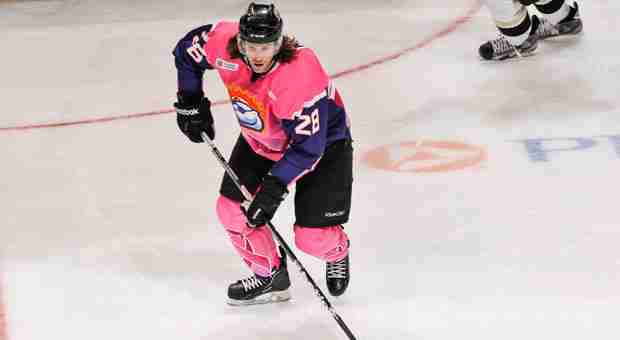 ORLANDO — Michael Neal scored two goals and added three assists as the Orlando Solar Bears defeated the Wheeling Nailers 7-2 on Thursday, Jan. 17 in front of 5,711 fans at the Amway Center.

“We were struggling,” said Neal after the game. “We had a rough road trip, but it’s good to be back home and get a win for everybody.”

Orlando got off to a fast start by scoring three goals in the first eight and a half minutes of play to jump out to a 3-0 lead over Wheeling midway through the first period.

Mike Liambas put the first goal of the game in for the Solar Bears thanks in part to an assist by Michael Neal. Liambas returned the favor two minutes later when he assisted Neal on his first goal of the night.

“Obviously it was a good night,” said Neal. “More importantly we got a win.”

Zach Hansen scored two goals for the Nailers during the first period, cutting the Solar Bears’ lead to 3-2 going into the second period.

Early in the second period Ryan Blair scored his first goal of the season for Orlando, extending the Solar Bears lead to 4-2 with 15:32 minutes left in the period.

“I’m so pumped for him,” said Liambas of Blair’s first goal. “He’s probably one of my best buddies on the team and I couldn’t be more happy for him.”

Neal put in his second goal of the night with 10:50 minutes remaining in the second period when Dale Mahovsky gave him the puck in front of the net for a clear shot on goal.

“It’s a big night for him,” said Liambas of Neal’s play. “A five point night by anyone is an outstanding night.”

Mahovsky extended the Solar Bears lead to 6-2 midway through the second period thanks to assists by Neal and Blair.

“We’ve been fortunate to get some guys in our lineup right now,” said Solar Bears head coach Drake Berehowsky after the game. “They’ve played well and they’ve contributed. I thought it was a whole team effort tonight.”

The third period didn’t see much scoring until nine and a half minutes in when Scott Tanski scored his seventh goal of the season, giving Orlando a 7-2 lead.

“It’s huge,” said Berehowsky about starting the series off with a win. “We look at the standings all the time and we need as many points as we can get.”

“We play within our structure,” said Berehowsky. “We are a tough team to play against and we give ourselves a chance to win every night.”

Saturday the first 3,000 fans in attendance at the Amway Center will receive a free Solar Bears car magnet.