‘Gangster Squad’ glimmers, yet fails to rise above classics 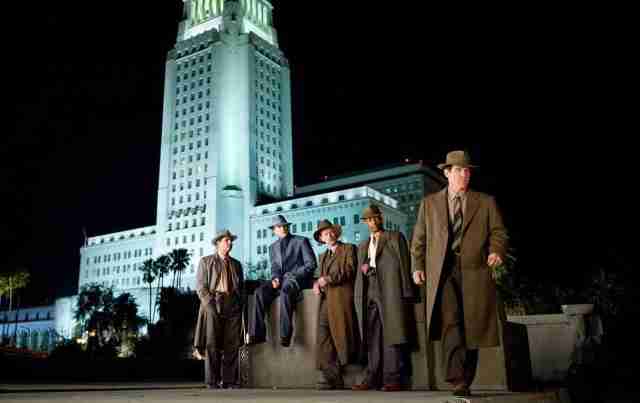 Director Ruben Fleischer successfully captures the story based on true events of gangster Mickey Cohen, vividly portrayed by Sean Penn, and his rise to power in the city of angels.

During 1949, Cohen’s insatiable hunger for power drives him to take what he believes is entitled to him: complete control over the drugs, guns, prostitutes and telephone bids that make their ways through Los Angeles. He’s nearly invincible with his team of goons to back him up as well as the control over politicians and many Los Angeles Police Department (LAPD) squadrons.

Fresh from the war, Sgt. John O’Mara (Josh Brolin) returns to his home in Los Angeles only to find it run by corruption. He needs no encouragement from Chief Parker (Nick Nolte) who enlists him to recruit an undercover, off-the-record squad who are skilled enough to take down Cohen’s reign of power and regain the soul of Los Angeles.

They are instructed not to kill Cohen for fear that another would take his place, but rather destroy his operations and cut off all of his sources of power.

O’Mara’s partner, Sgt. Jerry Wooters (Ryan Gosling) is not so eager to join the fight against Cohen, offering moments of humor in his attempt to stay positive about the city, until someone close to him is affected. Wooters then joins the two sergeants is a handful of men with a collectively unique set of skills and smarts to try to destroy Cohen’s world.

“Gangster Squad” succeeds in entertaining the audience with moments of dramatic suspense and action. Academy Award-winning director of photography Dion Beebe does not disappoint with beautiful cinematography that keeps you in the moment.

“The movie was interesting and portrayed the mobs well, but many parts were cliché such as which main characters die,” said Loren Weiland, 22, a personal trainer and Valencia College student. “Overall, it was a good movie and it portrayed everything in the right way.”

Sean Penn’s performance as cold-hearted Mickey Cohen is beautifully disturbing, epitomizing his psychopathic character and stealing the scene as the lead role.  The charm of Gosling and heroic character of Brolin combined make a strong, complete cast.

Looking at just the entertainment level, “Gangster Squad” succeeded. However, at times the storyline was predictable and disjointed. It does not have the substance to live up to the standard of the classics, such as “The Untouchables” and “The Godfather.”

Individually, “Gangster Squad” was a successful and entertaining movie with riveting moments, but does not equal the timelessness of others in its genre.