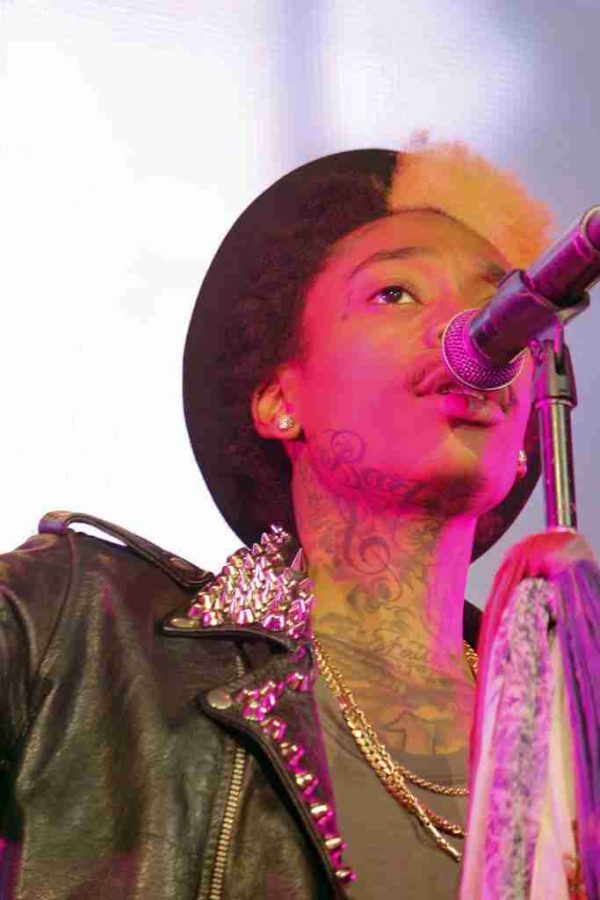 ORLANDO — In just over six years of releasing hip hop music the 25-year-old American rapper Cameron Jibril Thomaz, who is known best by his stage name Wiz Khalifa, is well on his way to creating a lasting legacy for himself.

Khalifa brought his unique crazy and cool style to the University of Central Florida for the second time in the last two years with a stop of his “The 2050 Tour” on Friday, Nov. 30.

A wild hip hop exhibition, themed in the distant future where the world has changed and everyone is encouraged to live life to its fullest. The opening acts along with Khalifa excited the nearly sold-out crowd who celebrated and embraced the concert’s work hard, play hard philosophy.

This show provided Khalifa with the opportunity to promote his newest studio album “O.N.I.F.C” set to be released on Dec. 4.

“Don’t let nobody kill your dreams and tell you that what you believe in isn’t the right thing,” said Khalifa, on stage before performing “Rise Above” off his new album.

Khalifa burst onto the scene, supported by his backup band, to begin his chart-topping hit “Black and Yellow” as the start of his performance. This hard-hitting beat with fast-paced lyrics gave an electrifying buzz that carried over through the rest of his set.

A strong draw to Khalifa’s performance style is his carefree coolness, that plays to his overall style while keeping a unique diversity as a hip hop artist. On slower tunes–with audience members holding up the customary lighters–he brings the pace down with an almost slow motion attitude. This is soon followed by a fast-paced hip hop jam, leaving his fans energized and wanting more.

“This is by far the best show I’ve ever seen, I love Wiz Khalifa. He’s my dream boy,” said audience member Anna Carpanzano.

The hit single “Work Hard, Play Hard” featured on Khalifa’s soon to be released “O.N.I.F.C” album, was performed twice, including the final song of the evening. It’s simple, but strong message shows that everyone that works hard in life deserves to enjoy their down time doing whatever makes them happy.

“I’ve been a fan of his for the last four years and everyone I know came to this concert, there was no way I was gonna miss it,” said Derek Hiegel, a freshmen and engineering major at UCF.

Along with Khalifa was several other hip-hop artists that worked to hype up the audience including Lola Monroe, Chevy Woods, Tuki Carter, Berner and Juicy J.

Juicy J, a member of the Academy Award-winning group “Three 6 Mafia” treated the audience to samples of some of their well known tracks including “Stay Fly,” “Sippin’ on Some Syrup,” and “Poppin’ My Collar.” This drew a wild reaction from fans of this group and worked perfectly to set up the final performance of the night by Khalifa.

Wiz Khalifa is a rising star in hip hop music supported by millions of dedicated fans that love his free living ideals and original style. This concert kept its easy going mantra focused on having fun and delivered just that.