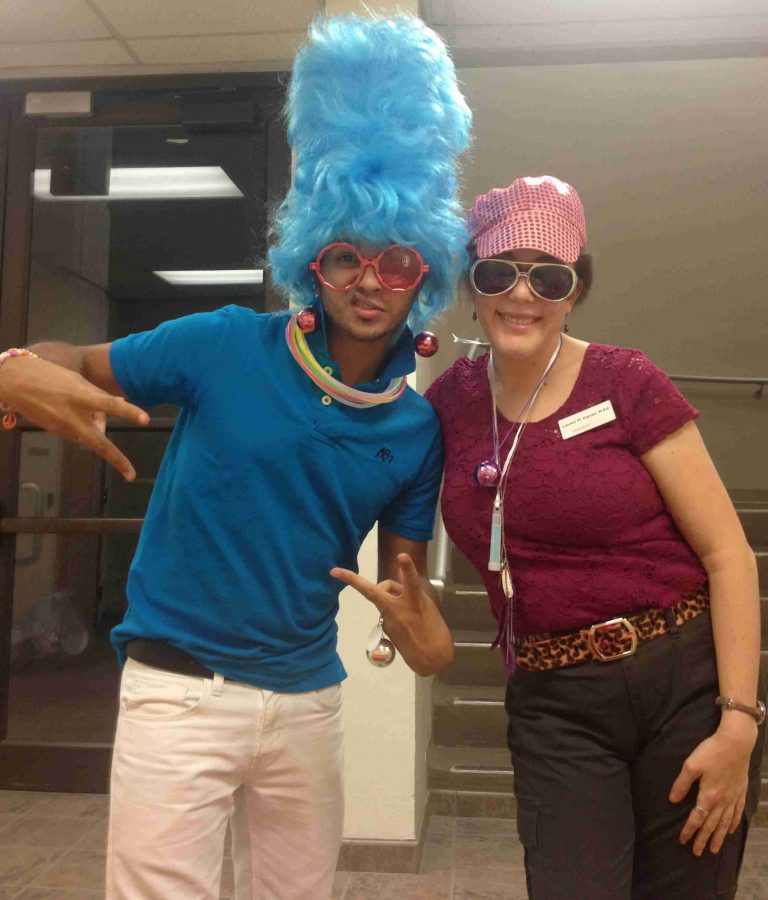 EAST CAMPUS — Student Development and the Valencia Volunteers organized a special “Glow the Night Away” Headphone Disco event, Friday night, for those who believe that no one should go hungry during this holiday season.

Charitable intentions and eclectic tastes in music brought a diverse group of people together on the first floor of Valencia’s East Campus, in a room near the cafeteria, where beats echoing from the speakers could be heard from outside the building.

The original plan was for two DJs to play separate styles of music at the same time, while attendees were handed a pair of headphones to wear, given the choice to switch between two channels of tunes.

At the last minute the Headphone Disco company fell through and DJ David Alberto came to mix it up for a crowd of about 45-50. Groups of friends and upwards of 20 people gathered around in concentric circles to jam to the beat.

For registered students, three canned goods got you through the door, and each of their guests donated $5 toward the Coalition for the Homeless. The nonperishable items will go to the Second Harvest food bank.

General studies major Ian Trent said, “I thought it was great. I think they collected a lot of food,” which was the initial goal of the event.

Trent wore a gray three-piece suit, with a royal purple tie to accent his outfit. Other students wore rave-like attire, sporting brightly colored T-shirts with glow sticks around their necks.

Carlos Lebron Rivera, Valencia Volunteers coordinator, said it was a great success, considering it was a Friday.

“Though each campus is different, I was surprised about how many people showed up,” said Student Development advisor Lauren Kaplan.

She credits Lebron Rivera as being a big influence in her decision to organize the “Glow the Night Away” Headphone Disco.

“The whole point of Valencia Volunteers is to help the community,” Kaplan said.

A music buff, herself, Kaplan feasts her ears on all the genres, from Top 40 to unknown bands.

While some felt the turnout was akin to the amount of people who showed up at the occasional house party, Shea Vassall, a computer technology major, expected to see more people at the event.

“I hope they have another one. There were so few people, that when my group started to leave, there were like three people dancing,” Vassal said.

For weeks there have been banners hung about the walls of building five, which serves as home base for incoming students and anyone seeking information about the school. There was a significant amount of advertising committed to getting the word out around campus.

With final exams less than a week away, students may have chosen to stay home and study during the weekend, Kaplan suggested.

In addition to the students and staff who attended, someone brought a baby into the musical fray. A group of four sat huddled around on the dance floor, playing and bobbing their heads, along with the young child, to the Dubstep/Pop that reverberated off the walls of the room.

As the first DJ let up on turntables, a second began to add more subtle melodies to his custom-made mix. With the party beginning to thin out at around 9:30 p.m., a group of about 15 students lingered in the cafeteria, chatting among themselves outside the doors of the disco, rehashing the highlights of the night.

Mike Acevedo, president of the Student Government Association for the East Campus, was there as well. While he helped take down the black lights and decorations, he said he also enjoyed the music.

SGA will be holding a White Out party on the East Campus within the next month and there will be a Fall Symphonic and jazz band concert next week. Check out the events calendar at valenciacollege.edu for more information.